"This pic w/ Punks from Steilhoop was made during a show with my first band Blausiegel at the local school, sometime during summer 1980. I do not recal all names but i remeber a fight between the unknown proll during Pogo with Prieve so that all other guys from Steilhoop came in to help him...thats what you see" (Rudi K.) 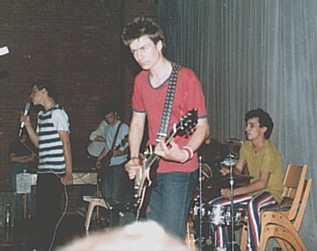 " We did rehearse 3 month with the band and tried about 4 singers - without success. Therefor i asked a Ted from my school to join in and i could convince him to try to sing in a punk band.... We were bloody bad that night but it did not matter as all the school did not see a band - not talking about a punk band - befor. We played 9 songs and 2 more and did cut time short for the main event after us   - a dump hippie-band wich had to stop after 3 songs as the place closed on time at 21:00!" (Rudi K.) 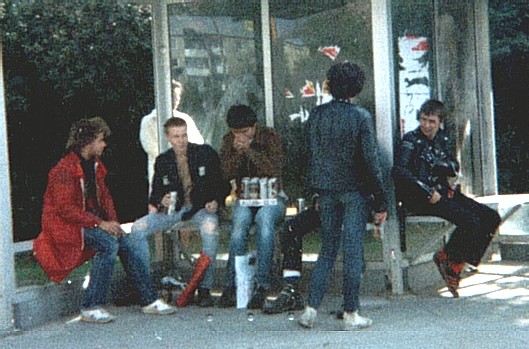 Biber, Pizza and Rudi K. went on to form 'Die Knallschoten' whilst Sommerfeld appeared in some drug-fency related stories in the local newspapers years later - stuff like offering someone a nice "I am gonna kill you with my knife" whilst actualy pointing a knife at him being full drunk - it was police report time again...someone noted he went on to be lost in the drug-scene but that just might not be true. 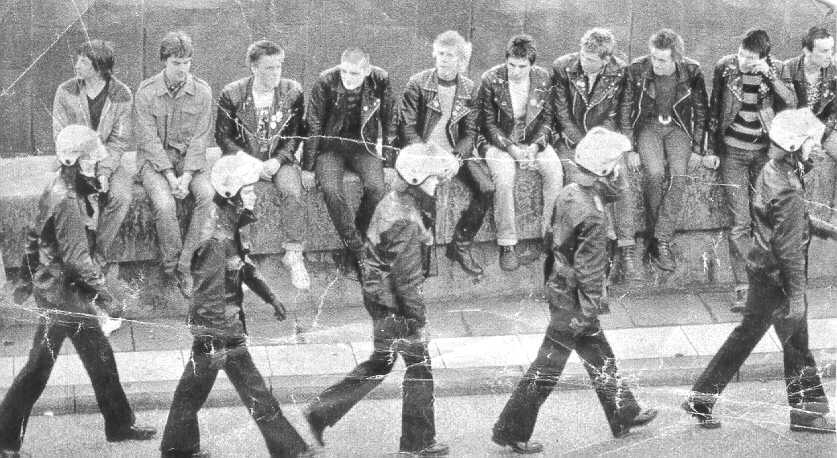 This was one of the famous "riot shows" at the Markthalle in 1980 - the hey-days of Hamburg Punk. The Clash were attacked by the punks as "sell out's" and "stars" and the show ended after Mike Strummer crashed his guitar on the head of a punk spitting at him. Police was soon on the spot and it was a lot of fun... And do you spot the punks look? I was short hair and classic motorcycle jaket with badges - no spikes, no iro, no fancy stuff. And: Police back then did not wear full riot gear but the nice leather-jackets all the punk were looking after in 2nd hand stores... 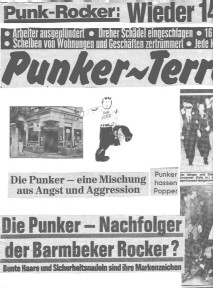 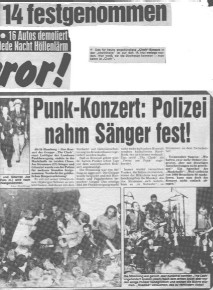 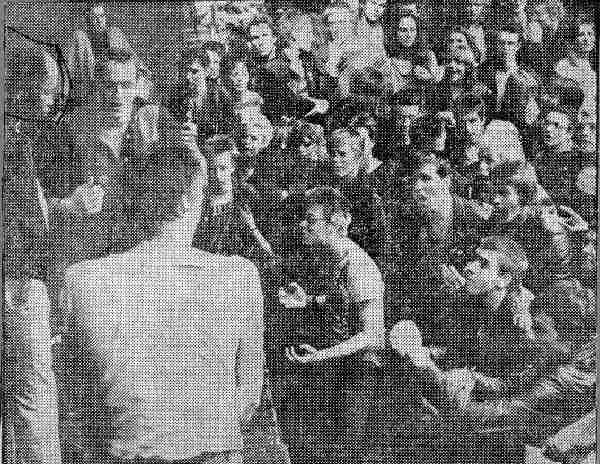 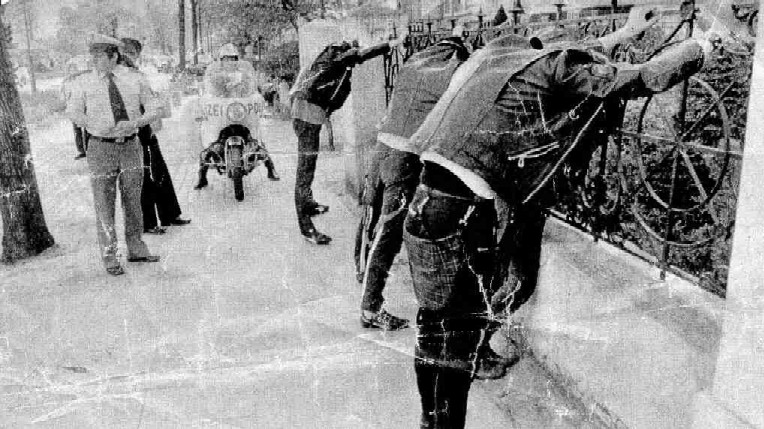 Picture 8: Punks being arrested in Hamburg-Poeseldorf during the "Punk attack on Poeseldorf"

That was another great Hamburg Punk Gem: After the usual (and known) fights between Punks and Teds they united against the "Popper" (rich kids wearing LaCoste stuff) and made a storm on the Poppers hot-spot - being the part of Hamburg called "Poeseldorf". The outcome were smashed cars, windows and arrested punks. BIG FUN! 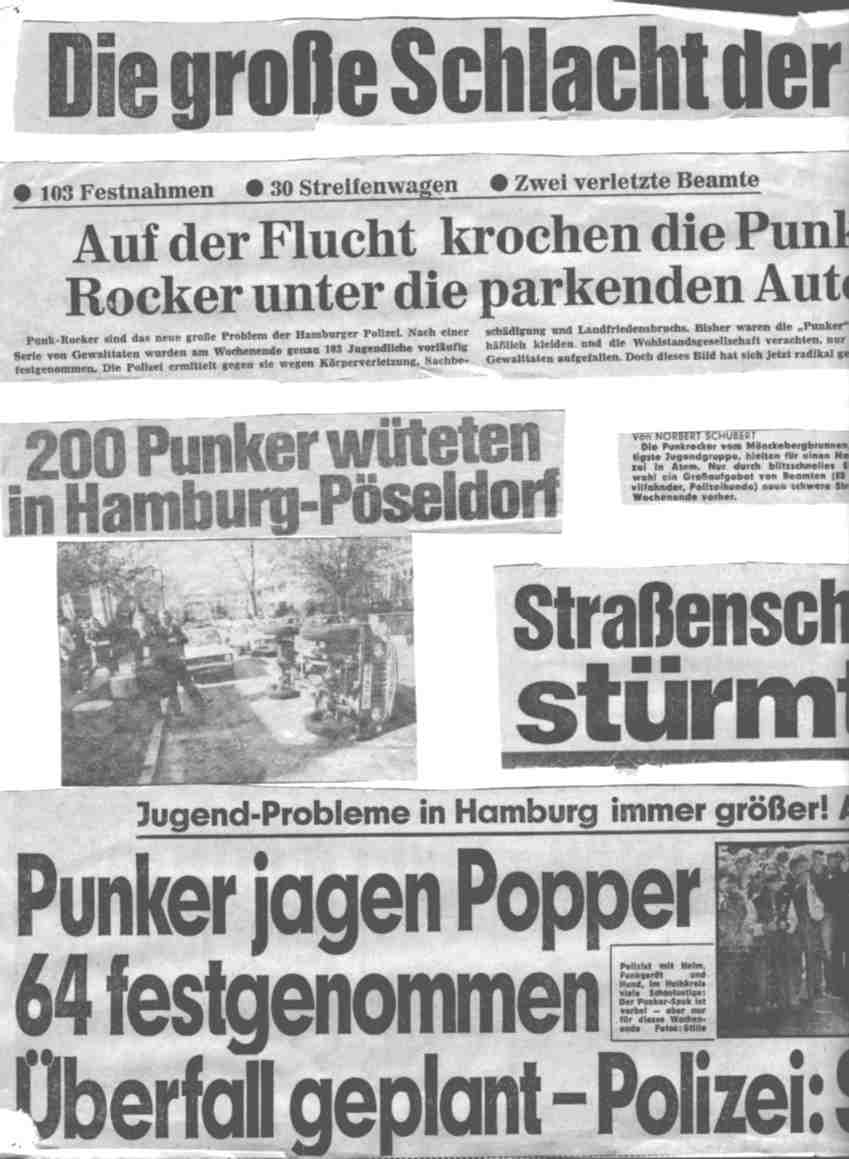 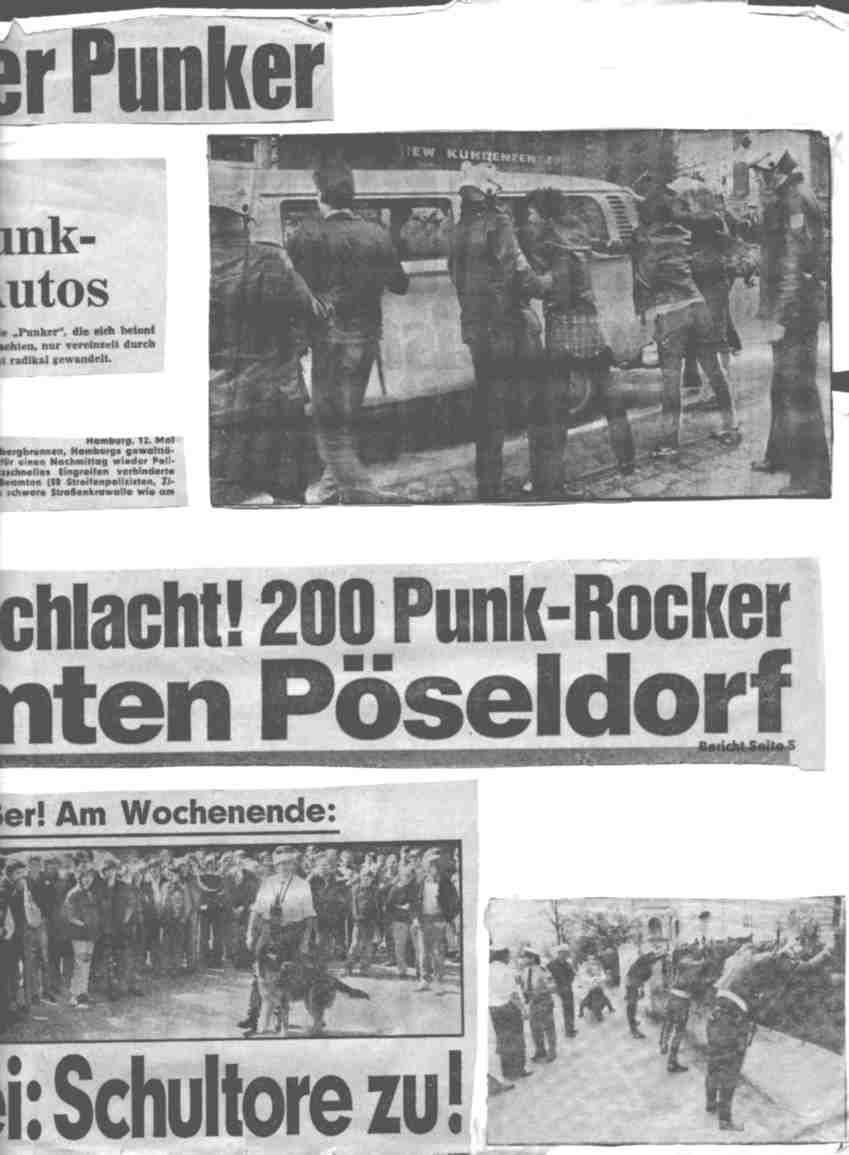 Picture 11: Another fiend - local hustlers did not like punks iritating their business on St. Pauli 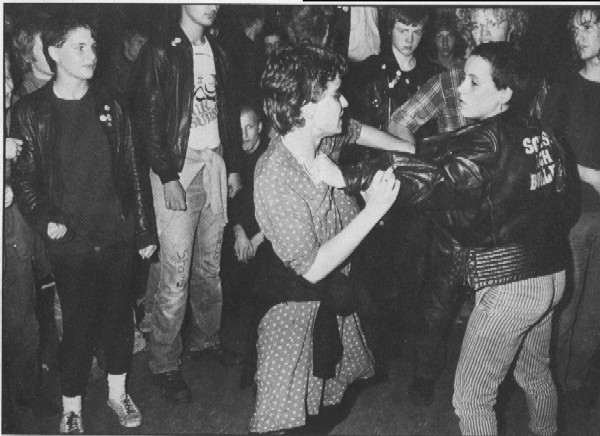 "Fantastic Snapshot from a Slime concert. Finn (Nimm 2) on the left , just look at her right hand. Next to her we see Pizza (Knallschoten, Channel Rats etc.) he still drums for several bands. The fighting girl on the right is "Gitte" , no one knows what`s going on with her today." (Minus) 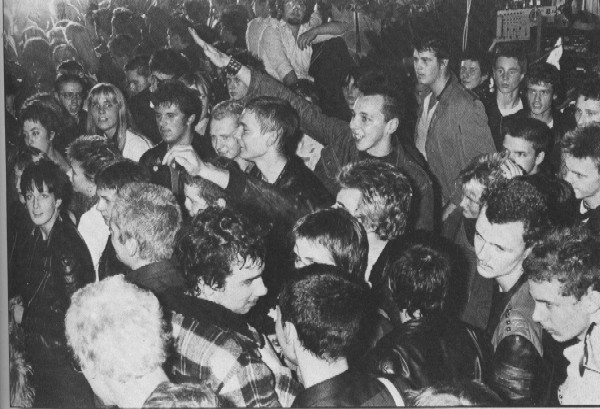 Picture 13: Crowd at the sameSlime show in 1980 (forgotten location)

"Holy shit , what`s the idea of photos like this ? Anyway , let`s enjoy `em now. The guy on the bottom who turns around must be "Stauber" , you still see him around. The tall guy in the top right corner is "Roche". It might be "Brecher" in the middle but that`s hard to say. Photo was done at a Slime concert." (Minus) 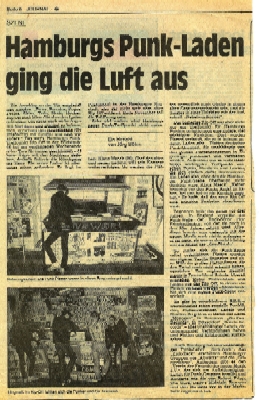 Picture 14: News clip on the first shut-down of the Rip-Off record shop - the #1 record store back then (click to enlarge). 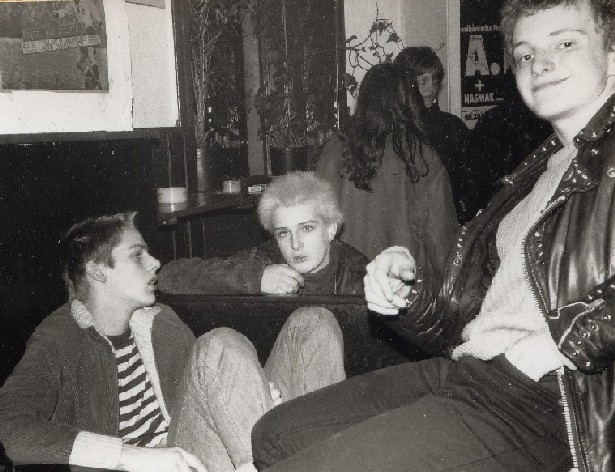 Picture 15: Votzer , Katja , Arne. Hanging out in some bar. Anyone an idea where this was? This cinema used to be a popular hangout for Punks on weekends. They were rolling movies one after another, virtually all night long. Great stuff like 'Punk in London' and allways some trouble. 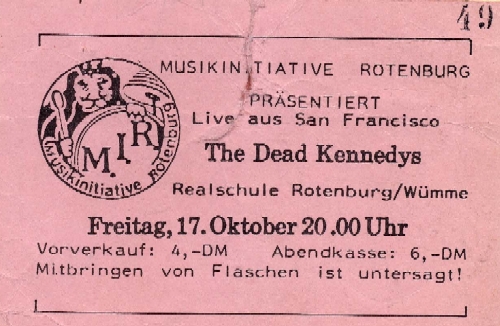 Picture 17: The legendary Dead Kennedys show 17.10.1980 in Rotenburg (some 50 km south of Hamburg) - only few dared to recon this one, US-Hardcore was not yet on the map. Thanks to torsten@nbg for this one!

Some nice posters, straight from the wall of Minus' appartment - an unbeliveable vault of treasure for old man like us (click to enlarge):